“She doesn’t play the piano” once said Gregg Smith, American composer and conductor of the renowned Gregg Smith Singers (GSS). “She makes music.” It is this deep reverence to Music as her highest artistic intention that has allowed Oresta Cybriwsky to unfold a rich and rewarding life deeply dedicated to self-expression through performing and recording, as well as to the encouragement of self-expression in others through teaching.

The Ukrainian-American pianist began her piano studies at the age of five with her father, Prof. George Cybriwsky, continued later with Prof. Bruce Simonds (former Dean of the Yale University School of Music), Prof. John Contiguglia (Syracuse University School of Music) and finally Professors Fernando Laires and Leon Fleisher (Master Classes) at the Peabody Conservatory in Baltimore, Maryland, where she graduated with a Bachelor of Music Degree in piano. Gregg Smith recognized and encouraged her flair for contemporary music. And so Gregg Smith invited Ms. Cybriwsky to New York City, where she began an exciting and inspiring intensive four years of professional work as pianist for the well-known vocal ensemble Gregg Smith Singers. Countless concerts and workshops followed, as well as extensive tours of 49 U.S. States and the Far East. She performed and recorded works by Ned Rorem, Elliot Carter, Lukas Foss, Louise Talma and Gregg Smith and others. The inspiring collaboration with many contemporary American composers was a further sign and confirmation of her expertise, and the renowned German composer Wilfried Hiller, corroborated this by stating “Oresta is a composer’s pianist”.

Oresta’s love for poetry and fascination for the expressive capacity of the voice have led her to combine these interests in the Art Song or Lied. With a two year study grant from the DAAD (German Academic Study Exchange) in 1978, Ms. Cybriwsky returned to the European “roots” of classical music, to specialize in German Lied with Prof. Konrad Richter at the University of Music and the Performing Arts in Stuttgart, Germany. She has remained in Europe with new roots, enjoying a particularly multi-faceted career as recital accompanist (vocal as well as instrumental), solo pianist, orchestral pianist (Stuttgart, Munich and Bamberg Philharmonic Orchestras), vocal coach at the Universities of Stuttgart & Würzburg, and opera coach at the Bavarian State Theater am Gärtnerplatz, Munich von 1981-86.

1991-92, in a European reunion with the Gregg Smith Singers and the renowned Les Percussions de Strasbourg, two extensive tours led through Italy and Sicily, where Cybriwsky was first pianist in Igor Stravinsky’s Les Noces. For the first time on German radio, classical art songs of Ukrainian composers were recorded and broadcast by the Bavarian Radio, with soprano Maria Stefiuk of the Kiev Opera and Oresta Cybriwsky at the piano. In 1993, she made her “Comeback” as solo pianist, producing her first solo CD prelude in 1996. Many 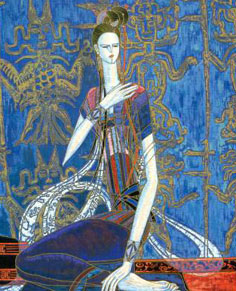 CD’s collaborating with various singers followed, and although Ms. Cybriwsky performs solo works on her frequent concerts, her true dedication lies in the interaction with vocal music.

Ms. Cybriwsky’s many years of concert experience, numerous studio and live recordings as well as tours on five continents all contribute significantly to her commitment as teacher/coach. From 1999-2004 she was on the faculty at the University of Music and Performing Arts in Munich, Germany as Associate Professor for Art Song, working with young pianists and singers as duos. Simultaneously she was vocal coach at the Tyrolean Music Conservatory in Innsbruck, Austria till 2003, thereby initiating an Art Song Class for pianists and singers.

She feels honoured to be able to pass the American Art Song on to her students and fellow-artists in other countries. By the same token she wishes to spread the wealthy European Lied tradition, one of the high forms of musical culture, not only in Europe and North America but in other foreign cultures as well, where it seems they are more fervently willing to continue this art form.

Her exceptionally wide-ranging art song repertoire has been enriched with the knowledge of several languages and a variety of musical styles; accordingly she transferred to the Bavarian Theater Academy August Everding, also in Munich as part of the University, where she is now vocal coach for the Musical Theatre Department. The vivaciousness of these multitalented young students and their all-embracing scope of expression inspire her work with them.

Working in foreign countries is a tremendously rewarding experience for Oresta Cybriwsky: summers are partially spent in Eppan, Southern Tyrol in Italy, where she is pianist for the Master Classes of Ks. Brigitte Fassbaender, and at the Tyrolean Opera Program in Maurach on the Achensee, Austria. Outside of Europe, she has given her own Master Classes in the People’s Republic of China in 2005 [in 2006 Visiting Professor at the Central Conservatory of Music, Beijing] as well as in various educational institutions in the U.S.A. In 2007 she will be in Chicago doing her interactive musical work with non-musicians in a somewhat therapeutic way, which she calls “Alignment” - an ongoing fascination with the possibility of healing through music. Writing articles about her profession for various magazines of the non-Western countries, (where career and training options for pianists other than that of soloist or piano teacher are still relatively unknown,) allows Ms. Cybriwsky to express thoughts and observations stemming from her professional experience.

Oresta Cybriwsky is dedicated to working intimately with people, in order to inspire the joy, the beauty and the power of music. The many facets of her extraordinary career have proven to herself and to others time and again that indeed “Music knows no boundaries”. The principle of duality that we are experiencing in our world as an oscillation between dissonance and harmony, finds its creative channel and ultimate integration in Music.